09 May PainChek, winner amongst the ASX’s small cap health and biotech stocks

Posted at 12:31h in From the CEO, Industry news by PainChek
0 Likes

News the Morrison Government will invest $5 million to sponsor a clinical trial of PainChek’s (ASX:PCK) pain recognition app in aged care centres has lit a rocket under the company’s shares Tuesday morning.

Shortly after the market opened, PCK shares hit 6.5c, a 91 per cent improvement on Monday’s close of 3.4c, adding more than $25 million to the company’s market cap. It was PainChek’s highest point since September last year.

“A national trial of world-first artificial intelligence technology promises to reduce the pain suffered by people living with dementia,” read a statement from minister for senior Australians and aged care, Ken Wyatt.

The deal will see a universal PainChek access licence for the more than 1,000 residential aged care providers in Australia and their 100,000 residents living with dementia for a one year period.

The funding comes amid a wave of promises for the health industry from the Coalition, though an expert told Stockhead not to bet on the funding with polling suggesting the government may change come the election.

It is starting to make money, with its quarterly report, also released on Tuesday morning, showing $34,000 in customer receipts for the March quarter and $87,000 in the year to date. 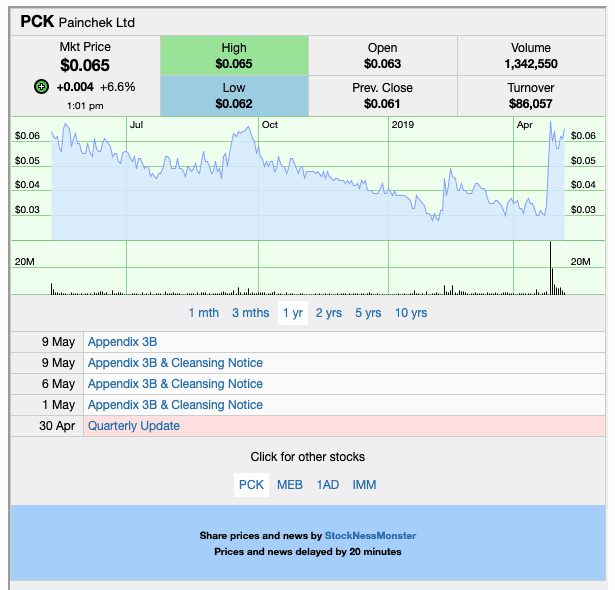 “This investment is set to trigger widespread and long-term use of the PainChek® app. From a business perspective we have been focused on how best to facilitate national uptake. We have been making good progress by approaching aged care providers individually but this takes the implementation to a whole new level in double-quick time,” said Daffas.

“The feedback is very positive from the residential aged care centres that are already using PainChek®. So facilitating uptake is going to provide equality of access to all service providers and their residents living with dementia. We are well positioned to roll out PainChek rapidly through a range of training programmes and partners including on-line training capabilities and we will be working hard to implement PainChek® as quickly as possible across nominated trial aged care homes”

“This program will help refine how the app gets integrated into every day clinical care in the aged residential setting. PainChek® is a uniquely Australian invention being progressed by an Australian leader in digital health innovation. The app effectively gives a voice to people who cannot verbalise their pain and we look forward to working with the government to expand our efforts to do just that,” said Daffas.

By closing this banner, scrolling this page, clicking a link or continuing to browse otherwise, you agree to the use of cookies.

This website uses cookies so that we can provide you with the best user experience possible. Cookie information is stored in your browser and performs functions such as recognising you when you return to our website and helping our team to understand which sections of the website you find most interesting and useful. You can adjust all of your cookie settings by navigating the tabs on the left hand side.

Strictly Necessary Cookie should be enabled at all times so that we can save your preferences for cookie settings.

If you disable this cookie, we will not be able to save your preferences. This means that every time you visit this website you will need to enable or disable cookies again.